A great pie starts with a great pie crust. Flaky, buttery and tender…

And there are a million and one perfect pie crust recipes out there. Hand-written, stained recipe cards passed down through generations… Some made with all shortening, some with combination of butter and shortening, some with lard, or even all butter… With vodka and without… Variations are endless.

And here I am contributing my version into the mix along with my tips on how to store/freeze pie dough for extended period and minimize shrinkage issue during baking.

Hopefully, this one will become your go-to pie crust recipe for years to come.

Contents hide
1 Why you’ll love this all-butter pie crust recipe?
2 Shortening Pie Crust VS All-Butter Pie Crust
3 How to make butter pie crust?
4 5 TIPS FOR PERFECTLY FLAKY TENDER PIE CRUST
5 Why is it so important to keep the butter and dough cold?
6 EASY WAY TO CRIMP THE EDGES OF A PIE
7 How to prevent pie crust from shrinking?
8 How to store homemade pie dough?
8.1 2 ways to freeze a pie dough:
9 How to blind-bake a pie crust:
10 Flaky All-Butter Pie Crust
10.1 Ingredients
10.2 Instructions
10.3 Tips & Notes:

You’ll get flaky, tender and the most flavorful pie crust every SINGLE time. Follow my tips below to ensure a pie success! I’ve made it enough to know how reliable and foolproof this recipe is, 8+ years and counting.

Which is better all butter pie crust, or old-fashioned shortening pie crust?

That being said, you’ll still get decent – aka rustic – looking pies with this butter pie dough, but extra tender and melt-in-your-mouth flaky!

How to make butter pie crust?

As mentioned above, it’s super easy to make this recipe. I usually double the recipe and make it in my stand mixer.

Why is it so important to keep the butter and dough cold?

It’s crucial to use cold butter and ice water to make a pie dough, because we don’t want to completely melt the butter into the dough. We want lots of small chunks of butter throughout the dough, so that when we bake the pie crust, those butter pieces melt, creating little pockets in the crust. (Remember, laminating technique for making flaky croissants? This’s basically the same concept.)

Butter swirls and chunks all over the pie dough is a good sign!!

EASY WAY TO CRIMP THE EDGES OF A PIE

When it comes to pie, I don’t do fancy.

Let me show you how I crimp the edges of my pie crusts, the simple way. I don’t cut out excess dough (just make sure not roll out too big circle), as you may have seen in a lot of recipes. It seems wasteful.

How to prevent pie crust from shrinking?

But there’s a way to minimize the shrinkage!

#1 key to avoid the shrinking problem is to rest and chill the pie dough before baking. Once you crimp the edges of the pie, put it in the fridge to chill while you prepare the filling, for at least 30 minutes. The longer it chills, the better.

#2 Make sure to crimp the edges over the lip of the pie dish, not inside the wall.

How to store homemade pie dough?

Extra pie dough is never a bad thing. In fact, it’s an absolute must for me!! Especially right before holiday season hits…

Pie dough can be refrigerated for up to 3 days. Or you can freeze them for up to 3 months.

2 ways to freeze a pie dough:

How to blind-bake a pie crust:

Some recipes, like my lemon meringue pie, pecan pie, banana cream pie, require the crust to be blind-baked first, which basically means the crust is cooked without the filling.

Save this amazing all-butter pie crust recipe now. And leave a review once you give it a try! 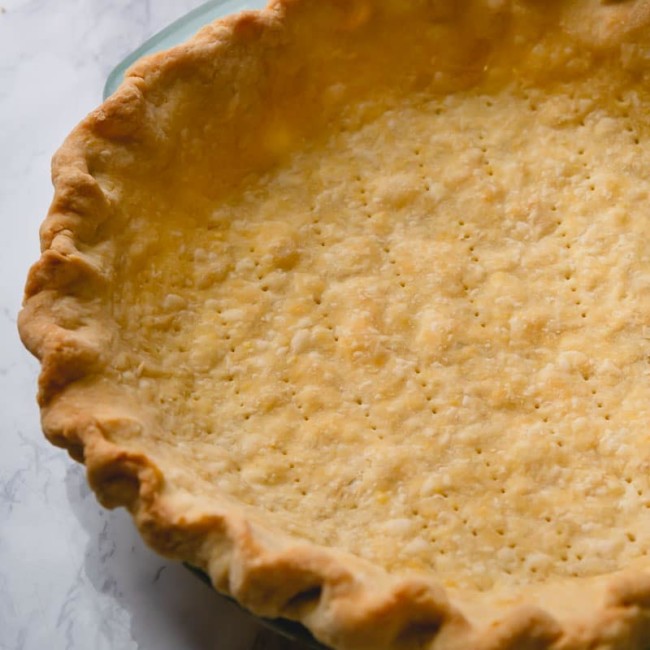 This recipe can be easily doubled for double-crust pies.
* Disclaimer: All nutrition information are estimates only. Read full disclosure here.
Author: Shinee